I’ve been wanting to make my own hex-grid flash modifiers for a while but was stumped for a reliable and robust mounting system for plastic drinking straws until I came across this post from Instructables. The secret I had been missing ? Silicon sealant…

Right, so you’re welcome to just go and read the original, or you can read about the metric version for a Canon Speedlite 430EX below.

To cut the straws I took the very simple approach of just chopping them above the first articulated bend, which comes out at around 44mm. I had no idea what this would map to in terms of how I would use the grid, but then I also used so little of each straw I decided to build three or four grids in total, each with varying lengths.

The card I used came from a carton holding 5 reams of A4 copier paper: if you work in an office it ought to be easy to find, and the card is much less flexible than cereal packets: it needs lightly scoring in order to fold neatly which is excellent for the grid body. The straws and silicone glue came from eBay, and unlike the original article my 500 straws came in a single large plastic box so there was no paper waste to dispose of.

To fit over the head of the flashgun, the top and bottom need to be 74mm wide, and the sides 40mm high – I have gone for a 76mm depth to the card allowing it to slip snugly over the flash with no extra mounting fixings required. The original article measured the straws and built the grid around them: I measured the flash and just dived in – in hindsight I should have also thought about the straws as they don’t quite fill the space within the card: an extra layer of card would have ensured a nice, snug fit and even alignment of the straws, whereas I just squirted more silicone into the gaps. Not as pretty, but functional.

The finished item looks like this, with and without the flash firing:

So what does the modifier do to the light from the flash ? Here’s an example both with and without, where the exposure is fixed and adjusted for the gridded strobe: 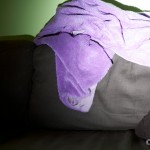 So apart from loosing a ton of power and reducing the number of shots you can get from a set of batteries, what can this do for you creatively ? Well, ignoring the obvious such as rear or hair highlights on portraits, I’ve been experimenting with fake sun, and offer the following pair of shots to support my experiments.

Both were shot this evening (after sunset) in my dining room under 100% artificial light. The first image is in ambient light to show how a normal picture would look, and the second is with the Speedlite held off-camera to the left, pointing at a patio door off to the image left at about 40 degrees to the subject. The angle was guesstimated, and I was aiming to get the light to appear as though it was falling naturally into the room – both images have had no crops or levels adjusted, although I did change the white balance to give the feeling of early afternoon sunlight:

The same result could have been obtained by putting a barn door/gobo on a flash on a stand positioned to the left, but this technique is interesting for zero setup images, such as those at a party or wedding: any area of glass to the side of the subject will allow a gridded bounce to lift the image with a much more flattering light.